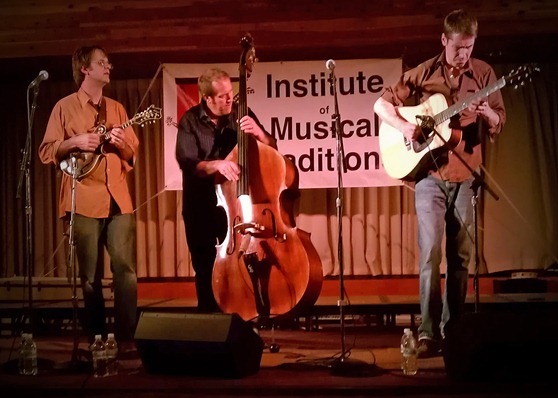 Many will know of the work of David Grisman – the Godfather of the modern mandolin. Others will know Chris Thile – the modern mandolin phenomenon of Nickel Creek and now Punch Brothers fame. Add to this prestigious list Matt Flinner who appeared with his exceptional trio at Saint Mark Presbyterian Church on Monday night. The concert was presented by the Institute of Musical Traditions who continue to bring the best and the brightest of modern Folk music to the Washington metro area.

Along with Matt on mandolin were bassist Eric Thorin and guitarist Ross Martin who weaved a tight fabric of jazz tinged acoustic string music. Matt indicated that this was their last stop of the current tour. They played several songs from their recently released Winter Harvest record on Compass records. The precision of their playing was exceptional.

For the second set, Matt introduced their ongoing “Music Du Jour” where each member writes a new song and they debut them on stage during the tour. The three tunes were the Ross composition Circus Market, Matt’s ‘Rested, and Eric’s Flying Home. All of the songs played to the trio’s strengths.

If you have an interest in innovative acoustic music and enjoy the works of players such as David Grisman, Tony Rice, Mike Marshall, or Darol Anger, you will most certainly love the music of Matt Flinner and his trio. Highly recommended!