After calling WETA the other day and talking to Daniel McCoy at WETA I received a reply posted below.

While the reasons stated in this email are interesting, I still contend they are shortsighted and problematic. For instance:

Here is the official WETA response:

Thank you for watching WETA, and for taking the time to write about the recent change our digital programming.  I appreciate the opportunity to respond.

Until this past week, we were simulcasting our analog signal on channel 26.1 from 6 a.m. – 6 p.m. Mon. through Fri., and 6 a.m. – 12 noon on weekends as part of the 4-Standard Definition (SD) daytime lineup.  We would then slide the simulcast service to channel 26.2 for prime time and overnight (6 p.m. – 6 a.m. M-F, 12 p.m. – 6 a.m. weekends) as part of the 1-HD/1-SD evening lineup.  That simulcast was originally set up to comply with FCC regulations requiring a simulcast service.  Recent relaxations of these requirements and improved technology have allowed us to expand our digital broadcast and provide all of our digital channels 24/7 without a simulcast of our analog signal.

We have recently put new digital encoders online, which has enhanced our digital offerings in two ways.  First, it has improved compression rates, while maintaining picture quality, which allows us to broadcast our 1 HD channel and 3 SD channels 24 hours a day. Second, it simplifies operation of the automation and encoding systems by providing service 24 hours a day on all four digital channels.  This also simplifies the Electronic Program Guide for both off-air and cable systems as no program service "jumps" channels any longer.  The technology of the new encoders also leaves room for more improvement in signal quality, so we expect things to improve over time.

Unfortunately for some, this expansion of service does not allow room a simulcast of TV26 on our digital channels.  Viewers can always tune into our analog broadcast of channel 26, but will now also have the opportunity to see HD programming 24/7 and variety of other digital programs through the night.  We hope you find some new programs that you will enjoy as we expand our program offerings.

If you have any further questions or comments, please let me know.

Thank you again for watching WETA.

I just got off the phone with a person named Daniel at the WETA offices. He confirmed that WETA has permanently abandoned simulcasting their main programming analog feed on OTA DTV channel 26-2 or any other sub channel. I asked the reasoning for this change and he could not provide a one.

I told him I felt this was a stunningly bad decision and would result in my being unable to watch his channel's main programming since I only watch DTV (SD & HDTV) OTA to the exclusion of analog broadcasts. He said he would relay my feedback but I don't have much confidence it will have any impact.

This change in programming makes no sense whatsoever. It's as if WTTG decided to only show the Fox News cable on their DTV transmission.

I suggested that someone from WETA's engineering staff monitor the AVS Forum for valuable feedback about how their DTV OTA signal is being received and critiqued.

This is one of the strangest developments I have yet to encounter in the forced march to DTV transmissions in 2009.

Just installed the new Windows Live Writer blogging client. Nice that it supports competing blogging services. I may have to restart my blogging activity to try out the new features.

Microsoft - The Next GM (General Motors)?

A lot of ink and cyber ink has been spilled about the recent woes of Microsoft and their much publicized delay for Vista - The Next Generation OS.

There has also been much written about the woes of GM (General Motors) and their steady decline. Much of the blame has been laid at the feet of the unions and you won't get much argument from me as all the failing industries (Airlines, US Car Makers, Teachers, Symphony Orchestras, etc.) today are heavily unionized. But in the case of GM, much blame can also be laid at management and the steadily deteriorating style, excitement, and quality of products they offered for sale. It this feature that I think bares some real resemblance to the current day Microsoft. Could Microsoft be the next GM that will rapidly decline into irrelevance?

I find it interesting that Bill Gates has been oft quoted as being a fan of Alfred Sloan who led GM. Could Microsoft and Seattle become the new rust belt of American Capitalism?

My tenure at Microsoft from 1993 to the beginning of 2000 was an interesting ride. By the end I had become convinced that Microsoft was running out of steam and that it was no longer a place that had any attraction for me to work there. During my time at Microsoft, I helped move tens of thousands of users in various Government agencies from DOS word processing to the then modern GUI interface of Windows and Office. It was a revolutionary time. I also worked hard to lobby for more Internet features in the Windows before the Windows 95 rollout. Sometimes, I would get a lot of push back from Microsoft corporate developers about the need for Internet capability. From my involvement in technical Government sales, I was sensing the pressing need for Microsoft to get on the Internet train. Of course, Bill finally had his "epiphany" about the Internet (better late than never) and a sea change was underway.

Microsoft is now in the unenviable position of producing the software equivalent of the bland "K Car" (a Chrylser product but GM also churned out bland me too products). Sure they sold skid loads of software to businesses just as train loads of K Cars were sold to fleet users, etc. Nobody had any passion for the cars just as Microsoft products no longer generate much love or passion for their products. One simple fact is Microsoft simply has just too many products. Just scan their newserver list to see list after list of products that many people have probably never heard of. In a recent article in the Washington Post about American Car manufacturer woes it makes the comparison of large number of brands and cars that American manufacturers make compared to European and Asian manufacturers who only have two or three brands in total. If I were Bill Gates, I'd slash and burn at least 50% of the products that Microsoft currently makes. Boil down the company to its bare essence and go hells bells on that core that makes real money and make these products best of breed. Jettison all the money losing products.

I don't have time to explore all of my comparisons to GM but I may revisit this topic in a further post. Bottom line is Microsoft peaked on August 24, 1995 (Windows 95 launch and my birthday by coincidence). I was there and participated. It is now ten years and counting and the decline of Microsoft is becoming extremely apparent.

Billg as softies refer to Bill Gates was often cited as saying that he was afraid of Microsoft turning into an IBM (large, slow, lumbering, etc.). Bill, it's worse, Microsoft has become the next GM! 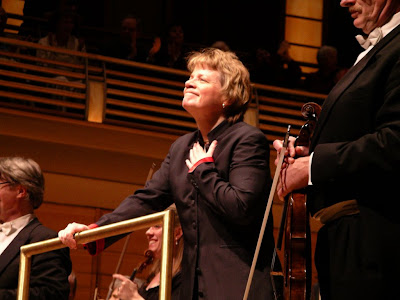 Just returned from a great concert at the one year old Strathmore Concert Hall in Bethesda, MD. This evening was special because it was the debut of the newly appointed BSO conductor Marin Alsop. I've bought a number of Ms. Alsops CDs on the German Naxos label. I have been impressed with the wide range of her repertoire. She has performed many modern composer works such as Phillip Glass and John Adams. Tonight she performed the 1st symphony of Baltimore born composer Christopher Rouse. It was the hightlight of the evening for me.

This was my first concert at Strathmore. The facility is gorgeous and the concert hall seems pretty near perfect acoustically. I had a second row orchestra seat and the sound was extremely balanced and clear. I had no trouble hearing all of the sections of the orchestra even though I was far off to the right side.

Here's a shot of the concert hall. All wood construction. Seats are very comfortable with plenty of leg room.


There was a Q&A session at the conclusion of the concert. I got to ask Marin if she would consider playing some Frank Zappa orchestral music. She said that she already does perform some pieces. I will be excited to see if this comes true in the future! I think it would be a great thing if the BSO with Marin Alsop performed Zappa considering that he was born in Baltimore. 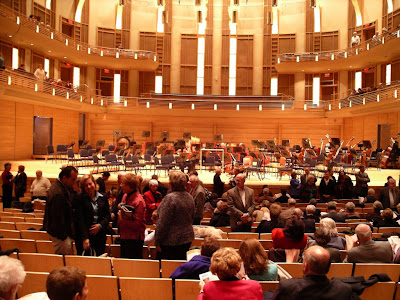 My Microsoft friend, Keith, just sent me the link to a 25 minute video of a recording session Robert Fripp was doing at Microsoft HQ for the new Windows Vista theme. Very cool! First Eno (earlier Windows versions), now Fripp. I can't wait to hear the final theme that is developed. I think Microsoft should call the next version of Windows - "No Pussyfooting".
Posted by Chris at 12:33 AM No comments: