Interesting to hear a very short snippet of the great song Crayon Angels by Judee Sill on the Showtime series United States of Tara tonight.

I had the rare opportunity to see her perform, at the Kennedy Center no-less, when she opened for Cat Stevens in the early 1970’s. I always loved her music and was very happy to pick up her reissued CDs when they became available. Her many fans include Andy Partridge of XTC!

It is so sad that she led such a tragic life and died so young. 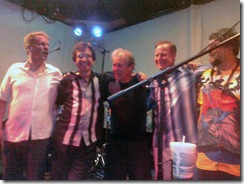 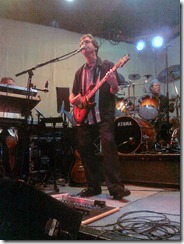 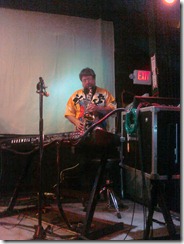 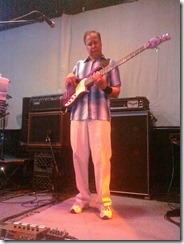 Followup on Ubuntu, Wireless, and WPA #2

Thanks to a comment to this blog made by knnniggett, there appears yet another way to deal with the RT2860 driver issue. This may turn out to be the definitive solution.

The problem with upgrading to the unreleased kernel 2.6.33 is that it is unreleased. In the case of my RT2860 card it limits the speed to "G" 54 mbs speeds, and at least on my machine I could no longer suspend or hibernate properly.

Apparently, there exists a package that installs backported drivers so that they will work on the current kernel. I just did this and I am happy to report it seems to work and I am running at "N" speeds. I'll have to test suspend after I make this post!

What I did was uninstall the 2.6.33 test kernel so I would revert back to 2.6.32. I then attempted to install the backport package that knnniggett suggests. He suggested this command line:

I found this didn't work for me, but a slight modification to reflect that with 10.04 we are running "Lucid" not "Karmic". So I modified the line to:

And behold it works! You may find you need to change the setting in the Synaptic Package Manager under the Software Sources - Updates Tab and check mark the Unsupported updates (lucid-backports) and then reload the repositories. You could probably also do this from the command line with an apt-get update type of command.

So thanks to knnniggett for the great suggestion.

Followup on Ubuntu, Wireless, and WPA

Well, my victory over non-functioning wireless adaptors and Ubuntu 10.04 was short lived. An install of Ubuntu updates this morning included the kernel update to 2.6.32 which replaces the default shipping Ubuntu 10.04 kernel. This of course broke my work using a compiled patched driver for the RT2860 chipset. Strangely, running through my driver install instructions does not work for me with kernel 2.6.32? I did some more searching and found this post and a link to a test kernel (2.6.33) that supposedly addresses the problem.

I downloaded the 2.6.33 test kernel to a thumb drive and installed it on my Ubuntu machine. I rebooted and don’t you know it works and I’m back online. Unfortunately, I note that it is only connecting at “G” (e.g. 54 mbs) speed. My card is capable of “N” speeds and with the original kernel and my compiled driver I could connect with a link speed of 135 mbs.

Oh well, I guess I should be thankful I can connect at all!

It is hard to understand the thought process that goes on in the Ubuntu organization that allows this type of thing (i.e. broken wifi drivers) to be acceptable. I think this post sums up the frustration pretty well.

In my case, instead of whining, I tried to do something about it and help others as well. It would be great if the powers that be (Shuttleworth?) at Ubuntu would take notice. It’s a pity because it mars Ubuntu 10.04 which is otherwise a stunning accomplishment.

Ubuntu’s latest release, 10.04, was officially posted this week. Overall, it is a very impressive effort and a milestone for the Open Source community. I have installed it on a new cheap desktop I recently built and it runs fantastically with fast boot times and nice desktop eye candy.

The one thing that spoils this effort is the continued hassles in getting wireless wifi cards working. I have a half dozen usb wifi sticks lying around and only one just works our of the box. I guess it wouldn’t be Linux if one didn’t have to at least compile a driver or two every now and then?

I bought the card on sale for $19.99 and on the basis that someone left comments that it worked in Ubuntu 10.04. Not sure what this fellow’s definition of working is but it doesn’t just work at least when you use WPA security. So, determined not to let this get the better of me, I embarked on a flurry of google searches.

This card uses the Ralink RT2860 chipset which is used in many products. The problem from what I’ve been able to determine is that the WPA source code definitions are wrong by default. It’s not clear why this is so but that seems to be the case. The fix and ultimate configuration is fairly straight forward if one can find clear and accurate instructions. There’s the rub.

I finally stumbled upon some good instructions but maddeningly they contained key errors that will surely frustrate the uninitiated. So, in the interest of helping those that follow, I offer my amended instructions that I have tested and believe to be accurate. With this guide you should be able to get a Ralink RT2860 based product running and connected to a secure router running WPA security and will do so after reboots.

The following steps were performed on a unmodified default Ubuntu 10.04 final code install.

Step 1
Download latest RT2860 driver source code from Ralink here. You need to enter a name and an email and press accept to download.

Step 2
Open and extract the downloaded file to a temporary directory in your Home directory.

Step 3
Using an editor such as the default Gedit, open the driver source code file ./os/linux/config.mk. Use the find command to locate HAS_WPA_SUPPLICANT and make sure it is set to yes. It should look like this when finished:

Close and save this file.

Step 4
Using an editor such as the default Gedit, open the file ./common/cmm_wpa.c. Use the find command to locate MIX_CIPHER_NOTUSE. Replace this entire line (keep on one line)with this code:

Step 5
Perform these commands in a Terminal session one at a time. You can cut and paste. Using sudo puts you into Admin mode so you will be prompted for you Admin (probably) your default password.

Step 6
Rename the old rt2860sta.ko driver file to rt2860sta.ko.dist using a command such as:

Note you need to replace the asterisk with the actual directory name of your kernel. Consult your file system directory structure for this.

This is to prevent the old driver from being used. You could just delete the file as well I suppose.

After you issue the previous command you should see the Desktop top panel Wireless icon come to life as it tries to connect. You will be prompted for a WPA password. Give it a little while and it should connect.

Not sure this command is necessary but you can use if the Wireless isn’t started automatically.

Step 8
Okay at this point you have made a lot of progress and should be happily surfing at up to 802.11n speeds. Take a break and marvel at your skills and the wonder of the Internet!

Step 9
But, and this is a biggie, what happens if you ever reboot? Unfortunately, you are back at square one without the RT2860 driver being loaded after a reboot. To remedy this situation, read on.

Step 10
Copy the newly compiled driver from your temporary build directory in ./os/linux using a command like:
sudo cp rt2860sta.ko /lib/modules/2.6.*/kernel/drivers/staging/rt2860/
Again replace the asterisk with the correct directory name.

Step 11
Update your modules boot file with the following command:
gksudo gedit /etc/modules
Add the command rt2860sta on a line at the end of the file.
Close and save the file.

Reboot and check to see that you are now automatically connecting to your wireless network!

I hope this tutorial may be helpful for some people.
Posted by Chris at 1:04 PM 87 comments: