I have been monitoring the USA Covid death rate and it has remained constant at 1.7% for months. That means 98.3% of the population has not died from Covid.

The so called Covid PCR test is fundamentally flawed (detects flu but reports Covid, etc). False positive tests are at least 50% so the real Covid numbers are substantially lower.

This is the biggest fraud perpetrated on the public in my lifetime. Big Media, Big Tech, and Big Politicians are colluding to destroy their constituents. It is truly incredible.

You can look at all the data and there is just one explanation for this anomaly (and it’s an extreme one): mass hysteria creating mass psychogenic illness and hysterical contagion brought about by lockdowns and media coverage highlighting and exaggerating the “pandemic.” These are real psychological conditions.

When this is all over and studied, the truth will come out. The mainstream and corporate media, including most local reporting, has done a disservice to the American public by sensationalizing the pandemic at the expense of serious and honest reporting. And it is literally making people sick.

Covid is a fraud

Covid is the biggest fraud perpetrated on the public in my lifetime. Watch this video (pulled down by YouTube) and learn.

I just edited a video for my friends at The Vinyl Revivers. It's an interview with Christian Rock artist Jodi Essex. I was happy to help put this video together. Take a look and "smash the subscribe button" as they say. There should be more exciting music interviews to come.
Posted by Chris at 9:17 AM 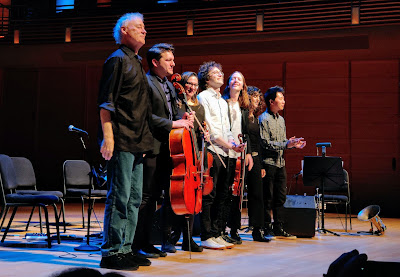 Mr. Hornsby then took the stage and proceeded to play both new and crowd favorites on solo piano with subtle MIDI controlled synthesizer provided by an Apple MacBook. Hornsby is an incredibly versatile player easily mixing Rock, Folk. Classical and Jazz idioms in one composition. He also has an instantly recognizable sound that reminds me of James Taylor's comments he once called "Genetic Chords". Bruce played these recognizable "Genetic Chords" on the song The Way It Is to great effect.

After his solo set, he was joined by yMusic to help flesh out compositions from his latest album Absolute Zero which features yMusic's accompaniment. Despite the challenge of integrating Hornsby's freewheeling style and the need to provide charts to the quartet, yMusic proved more than capable of playing off script and improvising with the pianist. Clearly both Bruce and yMusic were in their element and having a very good time.

yMusic's accompaniment on such favorites as Mandolin Rain was particularly poignant.

The show ended with a fun song composed by yMusic which featured Hornsby singing along with Alex (from yMusic) without piano.

A truly musical and fun night for fans of Bruce Hornsby and adventurous music.

I recently watched a very nice film about the development of Radar in England just before WWII. Free to watch with Amazon Prime. Castles In The Sky

I hope to post more to this blog in the coming year. My posting has been dominated by my work on The DC Hi-Fi Group website.
Posted by Chris at 11:09 PM 1 comment: