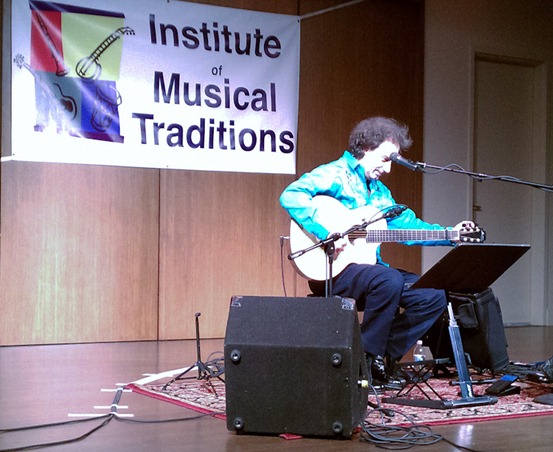 Last night Pierre Bensusan returned to the DC Metro area with an exhilarating set of acoustic music. Dubbed the “KIng of Reverb” by Dave of the Institute of Musical Traditions, Pierre played to a nearly full house in the intimate theater at the Takoma Park Community Center. The reverb remark was a running gag throughout the concert much akin to the “more cowbell” joke made famous in an SNL skit. At one point, I shouted “more cowbell” and Pierre responded with bemusement to the unfamiliar concept and added it to his ongoing humorous remarks between songs. Even though he was near the end of this tour, he was clearly in a jovial mood!

Pierre played his trademarked open tuning guitar based music that shifts seamlessly between medieval folk songs, celtic reels, wordless jazz singing, and middle eastern sonorities. Because of his long association with the open tuning style he could also be dubbed the “KIng of DADGAD”.

I first encountered his music while travelling in France in 1982 and stumbled upon his Solilaï album that I bought in an FNAC in Paris. I still have that LP today and enjoy listening to it along with his numerous other releases since then.

For me there was never a wrong note in the evening’s performance and this was probably the best of all the times that I have seen him perform.

Pierre concluded the evening with an encore medley of celtic tunes which was thrilling to me and was the perfect conclusion to a flawless performance.